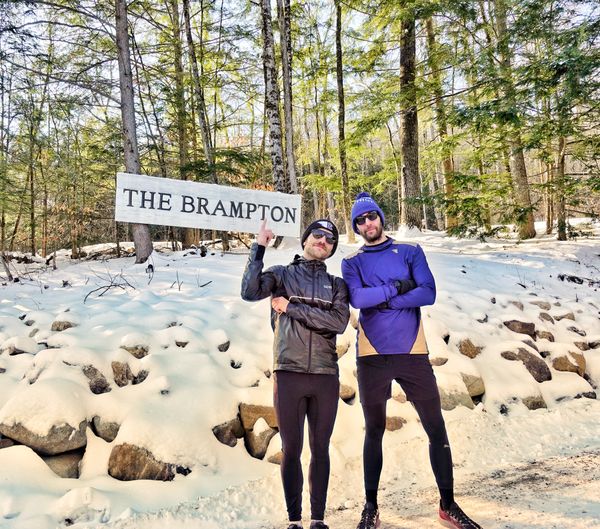 A few weeks back, I received an email from Mile High that highlighted a trip upstate to spend the long weekend nestled in a cozy lodge. It was forecasted to be cold and being a fair weather runner, I was nervous to take the plunge. I emailed Coach Andrew with some questions and decided to go for it – I could always just sit in the hot tub!

All the logistics were already sorted, including transportation. I showed up at the meeting point and a few pastries later, found myself at the scenic Brampton Lodge. We were met by the staff, our chef and two dogs! The cabin was beautiful, with more than enough space to comfortably accommodate the group.

After settling into our weekend home, we ate a healthy, delicious lunch before heading out for a run just as snow began to fall. The fresh powder was an easy and satisfying surface and so we went, forging our path as the sun set behind us.

In the evening went to a hockey game in Lake George. We quickly aligned to support our local Adirondack Thunder – and they crushed it! As I write this, I have a novelty team bobblehead sitting on my desk. We returned to the lodge victorious. Awaiting us, the dinner table looked like it belonged in a “chic country cabin” Pinterest board filled with another outstanding meal. Some of us went to bed while others carried on hanging out by the fire and playing games in the barn out back.

We woke up the next morning to the smell of a feast - enough french toast, eggs and bacon to keep the whole squad fueled and we were off for our second run. Splitting up between Coaches Andrew and Matt to accommodate different paces and mileage, conversation ensued as we ran through sun-covered mountains.

When we returned home, we hit the hot tub. I enjoyed a PB&J and head up to my room for a nap while others watched football or to a nearby state park for snowshoeing (check out those pictures)!

When both groups reunited, Coach Andrew led a sunset yoga session in the barn. We broke the circuit and had to make tough decisions between space heaters and flow tunes, but we had a great practice, leaving us rejuvenated. After an epic dinner, the crew hung around the fire. You could tell the vibe had become much more familiar as once strangers were now friends.

On our last day, it was single digits! We didn’t let that stop us and went out for one more run. We quickly warmed up as we trot alongside the scenic Hudson River, stopping for the occasional group pic. We were greeted by brunch around the fire before packing up. Already anticipating my soon-to-be withdrawal, I looked up the Mile High Run Club schedule on the car ride home.

Would I do it again? Absolutely. It was a great way to break free from my normal city routine with a group of people who share similar interests and passions. See you again, Mile High Wings!