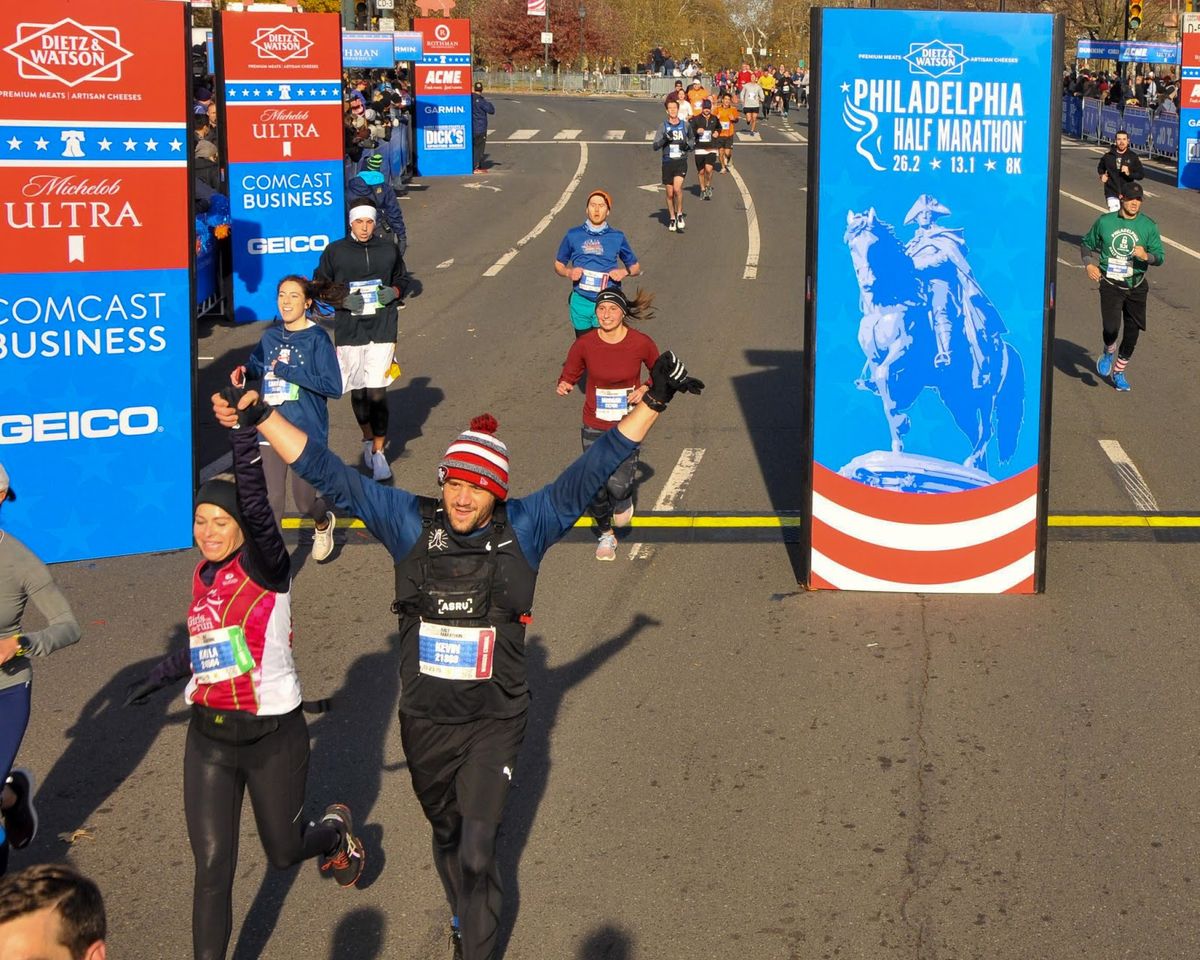 Running is Better {Together}

On November 23, 2019, we accomplished something that neither of us dreamed possible just a few short years ago. We completed the Philadelphia Half Marathon. We didn’t just complete the race, we crossed the finish line hand-in-hand.

Before I found Mile High Run Club— on my way to losing 65 pounds —I dreaded running. And before finding MHRC, my wife (Kayla) was an experienced runner who’d lost touch with the joy of it. And yet, that day, I was able to complete my first-ever half marathon, while Kayla was able to break a five-year hiatus and set a new PR.

We attribute our success to supporting and pushing one another and having several great places to train, including at MHRC where we found a community of incredible and encouraging coaches.

I never thought l’d be able to run a half marathon, let alone enjoy running it. In 2016, I got a wake-up call when I was rejected for life insurance. At 240-pounds, I’d been classified as clinically obese. I knew then that he had to make some significant lifestyle changes.

Mile High Run Club taught me how to run without getting injured, and I learned how to push myself and enjoy running at the same time. After two years of eating better, sleeping better, and increasing my fitness by building healthy habits, I succeeded at shedding 65-pounds.

Running was a crucial part of my fitness journey. It started with Yusuf helping me learn how to run during a ‘Runcation’ in the Poconos. That was followed by Raj giving me feedback on my running form and running in the woods upstate with Ryan. We have always loved the great energy and classes led by coaches Scott and Jess. Then Tim, who leads my favorite weekly MHRC class, suggested we do the Philly half for my first race.

Unlike me, Kayla’s love of running started early. Beginning in grade school, she competed on her school’s cross country and track teams. But eventually, Kayla developed an unhealthy relationship with running, especially from feeling the continual pressure living in the shadow of her track star brother. She continued to run while injured and endured psychological anxiety with racing.

Even though she continued to run for exercise, it wasn’t until MHRC that Kayla was able to renew her love of running. As soon as MHRC opened, it became one of Kayla’s favorites and the studio she most regularly attended.

She’s found the coaches at MHRC welcoming and encouraging. As a seasoned runner, she’s been surprised by how much she had to learn from them: the most surprising lesson of all being how fun running can be.

Leading up to the race, we would compete who could run further at each Mile High class. While our goal going into the half marathon was to run together, neither of us was certain how things would go down.

For the first few miles, I pushed the pace, but since we trained together, Kayla made sure that we slowed down to have enough steam to finish the whole race strong. Then, about halfway through the race, reinvigorated by the cheering sections, Kayla started picking up the speed, and it was my turn to call out the splits and slow us down.

The last stretch turned out to be the most challenging. I started running out of steam and fell behind Kayla. Even as I struggled, I focused on staying close, settling in behind Kayla and focusing on following her shoes. With less than a mile left, I got a final spurt of energy and practically dragged Kayla over the finish line, holding our hands in the air for a picture-worthy finish.

Despite taking different paths to get there, Kayla and I agreed that finishing the Philly Half Marathon was just as fulfilling as the months of training leading up to the race.

Running a full marathon may or may not be in our future. What we know for sure is that we’ll continue running—because it’s fun and we’ll be doing it together.